The Regional Hydro-Ecologic Simulation System (RHESSys) Workflows provides a series of Python tools for performing RHESSys data preparation workflows.  RHESSys is a GIS-based, hydro-ecological modelling framework designed to simulate carbon, water, and nutrient fluxes. By combining a set of physically-based process models and a methodology for partitioning and parameterizing the landscape, RHESSys is capable of modelling the spatial distribution and spatio-temporal interactions between different processes at the watershed scale

What can you do with RHESSys Workflows?

RHESSysWorkflows provides Python scripts for building RHESSys models. These tools build on the workflow system defined by EcohydroLib. EcohydroLib provides a series of Python scripts for performing ecohydrology data preparation workflows. Workflow sub-components are orchestrated via a metadata persistence store provided by the ecohydrolib.metadata package. These scripts are built on top of a series of task-oriented APIs defined in the Python package EcohydroLib. The workflow scripts provide tools for downloading and manipulating geospatial data needed to run a ecohydrology models, information such as: digital elevation model (DEM), soils, land cover, and vegetation leaf area index. These data can be drawn both from national spatial data infrastructure (NLCD, SSURGO) as well as custom local datasets.

The fundamental operation for any ecohydrology modeling workflow is to define the study region of interest (ROI). In EcohydroLib the ROI is simply defined as a bounding box of WGS84 latitude and longitude coordinates (e.g. coordinates for the upper- left and lower-right corners). For workflows using the National Hydrography Dataset (NHD), the ROI bounding box can be derived using catchment polygons associated with the stream reaches upstream of a particular gage. The user begins by picking a streamflow discharge gage listed in the NHD dataset. EcohydroLib can then determine the stream reaches upstream of the data, and then select the catchment polygons associated with each upstream reach. From these polygons, the bounding box of the land area draining through the streamflow gage can easily be calculated.

Once the ROI is known, EcohydroLib can extract datasets (DEM, soils, etc.) specific to the study area. Some of these datasets are extracted from static local copies of national spatial data (e.g. NLCD), while other are retrieved via web services interfaces from federal agency data centers (e.g. SSURGO soils data from USDA) or from third-party data centers (GeoBrain's DEM Explorer). However it is also possible for the user to register their own custom data for a given datatype (e.g. local LIDAR-based DEM). 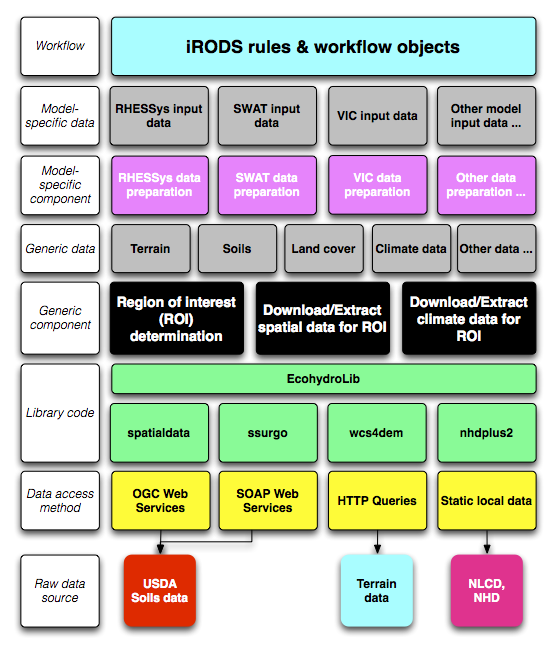 RHESSys has more than 100 state variables that can be looked at. Different output options and different printing time scales produce output associated with different variables. RHESSys is a process-based spatially explicit model of coupled terrestrial hydrologic and biogeochemical cycling processes. Key hydrologic processes represented in the model include snow accumulation and melt, interception, infiltration, transpiration, soil and litter interception evaporation, vertical drainage, shallow and deep groundwater subsurface lateral flow. In the model, energy, moisture, nitrogen and carbon are conserved and energy, wind and water are attenuated through multiple canopy layers. Modeling of carbon cycling dynamics include estimation of canopy photosynthesis and respiration, the allocation of net photosynthesis to leaves, stem and roots, plant turnover and litter and soil decomposition and respiration. Plant nitrogen cycling in is generally stoichiometrically tied to carbon cycling. Microbial nitrogen processes include decomposition, nitrification and denitrification as well as nitrate export. All processes are modeled over-spatially complex terrain to account for variation in meteorologic forcing conditions, radiation and other inputs. Both water and nitrogen are explicitly routed between spatial patches, contributing to spatial heterogeneity in soil moisture and nitrogen availability and ultimately water and nitrogen fluxes to the stream. RHESSys uses a hierarchical spatial framework that allows different processes to be modeled at their most representative scale. Patches are the smallest horizontal spatial unit and are typically 10-30m grid cells but spatially variable, irregularly shaped patches are supported. Within patches, vertical modeling units are included to represent multiple canopy layers (overstory/understory and mixed canopies). Most processes are run at a daily time step.

GRASS2WORLD (g2w):  A program to generate a worldfile from spatial data layers within GRASS GIS

CREATEFLOWPATH (cf): A program to generate a flowtable which describes connectivity between patches within a hillslope. Only needed in the routing mode.

RHESSys: A main program to simulate the model.

Links to sample outputs available as Resources in HydroShare