The search bar has simple and advanced capabilities. Please browse below to learn more.

One can combine these forms to search for multiple requirements at the same time. For example:

The above queries search all resource metadata for the terms listed. For more precise searches, one may also specify the metadata field that contains a desired term. 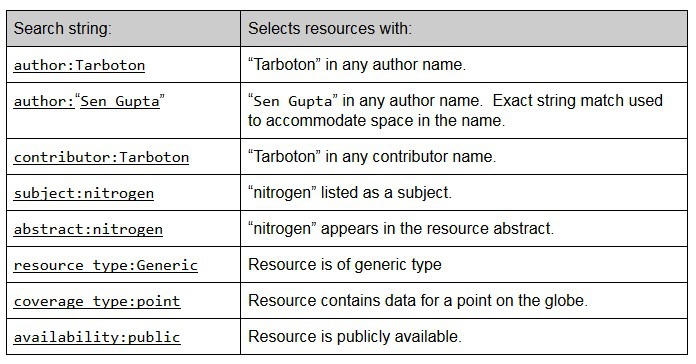 One can also combine various kinds of queries in the search bar by separating them with spaces. For example, the query:

Will return resources for which Tarboton and Couch are both authors, and one subject is CUAHSI.  For more advanced ways of combining requirements, see the section on query logic below.

The above queries select resources for which a specific date is mentioned. It is often more useful to specify a range of dates:

Note: Each one of these starts with a colon (:) and that a single : means “equal to”.

To specify a region, one can combine these. For example, the northwest corner of Nevada is listed as 42.05N, -120.06E, while the southeast corner is approximately 34.96N, -113.99E. Thus, to select those resources whose boxes are contained within Nevada, one could specify:

which instead selects those resources whose box centers are within Nevada.

By default, query parts are connected by a logical operator AND, in the sense that

Means the same thing as:

Other logical operators include OR, NOT, and -.

For example, the complement of the above query is:

Which selects resources whose centers are outside Nevada in terms of longitude.

Parentheses can be used to combine complex expressions. For example, the previous query could be written as: